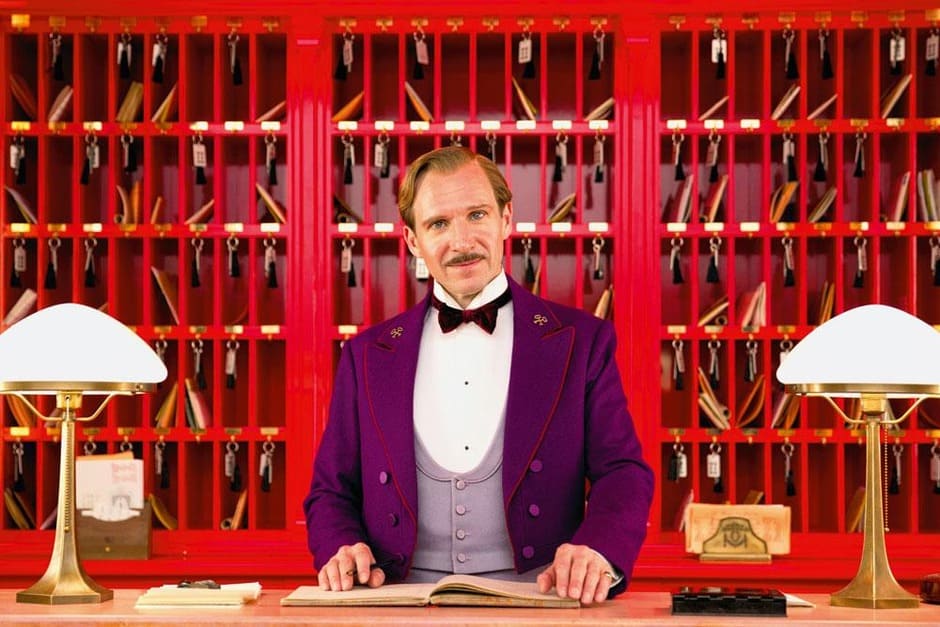 As you must know by now, I love movies ànd hotels. Fortunately I am not the only one and quite some movies are set (partly) in hotels. Here are some of my favorite hotel movies. Let me know if I forgot to mention a good one!

Wes Anderson‘s The Grand Budapest Hotel is one of my favorite movies all together. The movie was inspired by the writings of the Austrian novalist and journalist Stefan Zweig. The story takes place in the fictional town of Zubrowka. We follow the (mis)adventures of the concierge Monsieur Gustave H. (Ralph Fiennes) and the lobby boy Zero (Tony Revolori). Following them means following the downfall of a once glorious hotel.

The Grand Budapest Hotel was filmed in Germany. A department store in Görlitz (Saxony, Germany) called Kaufhaus Görlitz provided the perfect backdrop for the movie. Görlitz is a popular film location, movies like The Reader, The Monuments Men, Inglorious Basterds and many German movies were (partly) filmed there.

The Grand Hotel Budapest was not the first hotel movie by Wes Anderson. Hotel Chevalier is a 2007 short film (13 minutes) starring Jason Schwartzman and Natalie Portman. The (former) lovers meet in a hotel Room in Paris. The short film is a prologue to the Darjeeling Limited as it takes place two weeks before Jack joins his brothers on the trip through India (it was intended as a stand alone movie at first but it ended up as the prologue to the Darjeeling Limited).

Hotel Chevalier was filmed with just a small crew within a few days at the 5 star hôtel Raphael in Paris.

Four Rooms is a collection of four short films (each by a different director). Each story is set on New Year’s Eve in a room of Chateau Marmont. Chateau Marmont is located above Sunset Strip in West Hollywood. It’s the most legendary hotel in Hollywood and the place to stay for the A-list.

Tim Roth is Ted the Bellhop and he plays in all segments. I liked the movie, it’s different and original. Some of the actors besides Tim Roth are Madonna, Marisa Tomei, Salma Hayek and Antonio Banderas.

This is a recent movie by Drew Goddard, set in 1969 in a hotel that’s built exactly on the Nevada-California state line. The guests can chose if they want to sleep in Nevada or in California! The El Royale used to be a glorious hotel with loads of stars and celebs but it’s empty now. When the hotel lost its gambling license, guests stopped coming. There is just one employee left now, Miles (played by Lewis Pullman) who is the receptionist, the bartender and … well he’s a one man show basically.

So, what are all these guest doing here suddenly? A priest, a singer, a salesman and some badass chick all checked in at the same time. I must admit that Bad Times at the El Royale avered to be much better than I expected. I really liked it. It wasn’t filmed in an actual hotel.

Audrey Tautou plays a gold digger who finds ‘her men’ in luxury hotels. She ends up falling in love with Jean, played by Gad Elmaleh, who is a simple hotel employee. Hors de Prix is packed with clichés but it’s worth watching for Gad, Audrey and the beautiful hotels.

The movie was filmed in locations in Biarritz, Nice and Monaco but mainly in the stunning Hôtel du Palais in Biarritz.

The Cocoanuts is the first feature length musical ever released by an American Studio. It was adapted from the Broadway musical and all four Marx Brothers played in it. The hilarious movie is set in the Hotel de Cocoanut in the 20s. Mr. Hammer runs this bankrupt Florida hotel and tries to ‘earn’ money to get out of the financial sorrows.

Barton Fink, brilliantly played by John Turturro, moves from New York to Hollywood to write a movie. He stays at Hotel Earle but he has difficulties writing there and his writer’s block keeps getting worse.

Fun fact: while Turturro was working on the Coen brothers movie, he wrote the outline for his movie Romance & Cigarettes between takes on the typewriter used in the film.

A middle-aged actor and a young woman meet in a Tokyo hotel. They are very different but they still do connect as they both feel lonely and lost. This Sofia Coppola movie was very succesful and is still seen as one of the most iconic movies ever. I never really got it, I found the movie quite boring.

The movie was filmed throughout different locations in Japan but the hotel they filmed in was the Park Hyatt Tokyo. The 5 star hotel occupies the top 14 floors of a 52-story tower. It has 177 guestrooms including 23 suites. I read somewhere that the New York Grill (on the 52nd floor) with the stunning view of Tokyo is often filled with tourists who want to make a picture on the exact same spot as in the famous movie scene.

This is a very impressive movie based on the true story of Paul Rusesabagina who helped, hid and protected 1,200 Hutu and Tutsi refugees during the Rwandan genocide in 1994. Don Cheadle plays the hotel manager of Hôtel des Mille Collines in Kigali.

The actual hotel was not used in the movie. Hotel Rwanda was mostly filmed in South-Africa.

Judi Dench, Maggie Smith, Bill Nighy amongst others play British retirees who travel to India to take up residence at the Best Exotic Marigold Hotel. The hotel is not at all what they expected though. It’s a simple feelgood movie really but the surroundings (Rajasthan mostly) are stunning.

The actual hotel has been swamped with bookings since the release of the movie (the sequel was filmed there as well). There has been a 40% rise in reservations since the first movie! The hotel is called Ravla Khempur and it’s an equestrian hotel. It was built in the 1620s and it was originally the haveli (kind of a palace) of a chieftain.

We couldn’t forget Count Dracula’s very own hotel, could we? The animated film was first released in 2012. Apparently everybody loves the hotel as there was a second film (2015), a third (2018) and a fourth set to be released in 2021.

The Hotel New Hampshire is a film adaptation of a 1981 novel by John Irving. It’s the story of the Berry family: mom Mary, dad Win and their five children. We follow them for years, from the moment the parents fall in love to …well, through all the family’s different hotels and misadventures.

A nice movie with some very interesting characters and of course a young Rob Lowe, Jodie Foster, Nastassja Kinski and many more. The movie was filmed in Canada. Hôtel Tadoussac in Québec ‘is’ The Hotel New Hampshire.

Fawlty Towers is not a movie but it couldn’t be left out from this list as the British television show is all about a hotel. It was broadcasted from 1975 until 1979. They used the Wooburn Grange Country Club in Buckinghamshire instead of a hotel for the exterior. The building doesn’t exist anymore as it was destroyed by a fire in the 90s.

Basil Fawlty (John Cleese) is the terrible hotel owner of a fictional hotel called Fawlty Towers. He is rude and paranoid. His bossy wife Sybil is not the brightest woman alive and the Spanish waiter Manuel is unprofessional and clumsy. So yes, Fawlty Towers is fun 🙂

John Cleese was inspired by a real hotel. He was staying at the Gleneagles hotel in Torquay (Devon) with the rest of the team while filming for Monty Python’s Flying Circus. The eccentric manager was utterly rude and his wife was nasty and bossy. The Gleneagles doesn’t exist anymore.

A film noir with Marilyn Monroe! I haven’t seen it but it is known as one of Monroe’s more serious and better roles. She plays a disturbed babysitter watching a child at a New York hotel. Don’t bother to knock is also Anne Bancroft’s first film. The movie was not shot in a hotel but at the 20th Century Fox Studios in Los Angeles.

Here’s Johnny! Stanley Kubricks’s famous horror movie, based on Stephen King’s novel, was mostly shot on studio sets. A few exterior shots were shot on location. The Timberline Lodge was used as the exterior of the fictional Overlook Hotel in The Shining. It’s a popular tourist attraction for film lovers.

The Shining is not the only movie that used the lodge as a filming location. Hear No Evil, All the Young Men and Wild are some movies that have been filmed there as well.

This is a simple cliché romantic comedy with Michael J. Fox. He plays a hotel concierge who has been saving to open up his own hotel on Roosevelt Island one day. At some point in the movie he will have to make a decision between, yes, love or money. The Pierre in Manhattan was used as the fictional Bradbury hotel.

The house on the painting ‘House by the Railroad’ by Edward Hopper (1925) inspired Hitchcock’s Psycho house. It was built in the Universal Studios. The Bates house, though moved from its original location, still resides on Universal’s lot. The motel has been replicated. Check the Psycho house backlot here.

I just watched the ending of the Bates Motel on Netflix yesterday. Brrrr….

We follow different story lines in this very cool and unpredictable Jim Jarmusch movie that takes place in a cheap Memphis motel dedicated to Elvis Presley.

Main scenes were filmed in the Arcade Restaurant and in the dilapidated Arcade Hotel . The Arcade restaurant is the oldest operating restaurant in Memphis. The hotel closed down in 1983 and was demolished some years later.

This is one of the two movies on this list that I did not watch but I will soon for sure as the trailer looks weird and fun. The movie was filmed in the Slieve Donard Hotel in Northern Ireland.

From IMDb: “The Hotel Splendide, located on a remote and desolate island accessible only by ferry that operates once a month, is a family owned and operated business – a health spa resort. It had long been managed by Edna Blanche on her unusual vision. When she died a year ago and her chronically constipated husband Morton Blanche retired, Dezmond Blanche, one of their offspring who suffers from skin flaking on his face, assumes management of the hotel.”

This is your average feelgood romcom. Handsome rich guy meets single mom and maid in a hotel and falls in love with her thinking she’s rich too….Don’t be fooled though, she’s still Jenny from the block. The main scenes were filmed at the Waldorf Astoria in Manhattan.

Some films did not make the list as the hotel location was not the main location in the movie but I still want to mention them as they have some iconic hotel scenes:

Pretty Woman (1990) with Julia Roberts and Richard Gere, filmed at the Regent Beverly Wilshire Hotel. Man on a ledge (2012) filmed at the Roosevelt Hotel in Manhattan. Well not really in the hotel but on the ledge 🙂

Fear and Loathing in Las Vegas (1998) with Johnny Depp and Benito Del Toro has several hotel scenes, at the Stardust Hotel & Casino and at the Le Bistro Lounge, Riviera Hotel & Casino – both in Las Vegas (both supposed to be Circus Circus but they were not allowed to film there). Some scenes were also shot in Los Angeles at the Ambassador Hotel. The Ambassador and the Stardust have been demolished since.

Tell me, which ‘hotel movies’ did we forget to mention? Any memorable hotel scenes maybe?