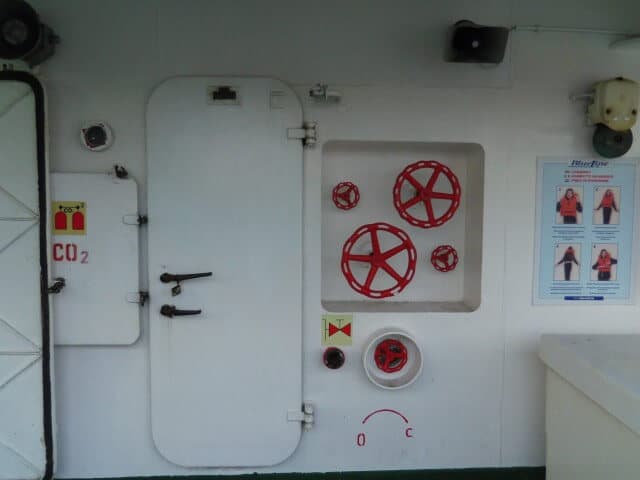 There are a few companies sailing from different towns in Italy to various towns in Croatia. The main crossing though is from Ancona to Split. I did the crossing quite often in the last few years and thought I’d share my recent experiences with you with the Dalmatia and the Regina della Pace ferries from the Blue Line company.

There are two companies that make the crossing all year round: Jadrolinija and Blue Line. Blue Line often offers cheaper deals then Jadrolinija but it’s best to compare online at the time of booking. Both companies have vessels sailing daily in high season. In winter time, Blue Line sails twice a week and Jadrolinija three times (depending of the weather). All crossings off season are done at nighttime, in summer there are also a few day crossings every week.

We travelled last week with Blue Line’s ferry “Dalmatia”, which is relatively new in their fleet. The ferry left Ancona at 20h30 and arrived in Split at 7h30. The Jadrolinija ferry leaving the same evening, was sailing out at 21h00, arrival time was 7h00.

We had not reserved (which you must absolutely do in summer though as the ferries are often fully booked in high season) and drove straight down to the ferry station in Ancona (on the Via Luigi Einaudi. The ferries are perfectly well signposted from the moment you drive into Ancona)  at about 17h00. The Maritime station building looked depressing in the snow. There are a few companies represented inside where you can buy tickets and get the information you need. The ticket office of Anek line, running a ferry to Igoumenitsa in Greece was busy with people speaking loudly. The rest of the building was completely empty and most services like the exchange office were closed. There was also a dark and lifeless bar on the first floor with three old guys playing cards.

The lady from Blue Lines was well-disposed and the cabin was booked within minutes, no problem at all here. We could enter the ship 2 hours prior to the sailing out, and no later then half an hour before. As it was freezing cold we went in as soon as possible.

The Dalmatia fortunatly was well heated! It’s a nice and comfortable vessel of 127,2 meters long and 21,7 meters wide. There are 480 beds and room for about 275 cars and around 26 trucks. The trucker market is relatively big for the ferry line. They even have a trucker area in the a la carte restaurant where only the truckers can sit (in front of the tv) with a special trucker menu and all. Not that you would want a special menu because seriously the food was very bad and it was also the only spot on the ship were the staff was not very nice. We had Cevapcici and Spaghetti with tomato sauce, which both are not very difficult dishes I would say.  Next time I’m bringing my own dinner!

There is another restaurant, the self service one, which was closed in low season. You can also find a small casino on board, a cute chapel on the top deck and a duty free shop with weird opening hours selling mostly cheap cigarettes, cheap alcohol and giant chocolate. There are different bars on the Dalmatia but the one on the 7th deck was the nicest. It’s called the nightclub: it has windows all around and a small dancefloor. It was empty when we were there, it has a very different atmosphere in the summer months. We had a coffee and a beer, it was cosy and the staff was entertaining and friendly.

The staff on the Blue Line ferry was nice, most of them spoke quite good English. About half of the staff we saw was from the Philippines and the other half was Croatian. At the bars it was one on one. So one Croatian and one Filipino. They seemed to have fun and enjoy their jobs which is always good for the atmosphere.

When you get into the ship, you start by parking your car. Don’t forget to take a bag with the stuff you’ll need later on during the crossing to or from Croatia as you are not allowed back on the car deck once the ship is at sea. After parking you go up by the stairs and arrive on deck 5 where there is the reception area. The reception lady was welcoming and helpful without being utterly friendly but friendly enough. In summer time the cabins are on deck 5 and 7 but in winter time the cabins on deck 7 close. So we got a cabin assigned on deck 5 with four beds, a shower , a toilet and a window. Take care by the way as they keep one passeport per cabin at the reception until you arrive at you destination. Don’t forget it there when you leave the ferry!

The room was small but then again we are on a ferry boat not in a luxury Palace hotel so actually I thought the cabin was quite comfortable. It is a great way to make the trip with children, they love the bunk beds and they sleep nearly all the way so the trip doesn’t seem too long for them. The beds were already made up, it was clean and there were enough towels. There is a stewart awake at reception all night (they run different shifts, I saw three different stewarts through out the night) if ever you need anything.

The sea was quite rough during our winter crossing so I did not sleep a lot. I was wandering around the ship in the middle of the night. The outside deck was totally empty. Watching the stars and the waves in the night all alone was so pretty. I even did the “I’m on the top of the world” Titanic bit until I realized I did not want to think about the Titanic right at that moment. Had a hard time waking up in the morning when the general wake up call went through the speakers around 6h30. We arrived in Split right on time as planned. Driving off the ferry was efficient. When you drive off you have to get in line for customs but all was well organized.

All together, I would recommend. The ferry is a good way to travel from Italy to Croatia with your car but without arriving all tired after a long drive. The cabins were clean and comfortable. The staff friendly and helpful. We arrived right on time. The only downside was the food.

The ferry seems more modern then the Dalmatia, although far less charming. I found the Regina della Pace a bit claustro. There are less outside areas then on the Dalmatia but the ferry is more comfortable. The staff was friendly as usual on the Blue Line ferries and the food was not that great (as usual too). The amenities are  similar on both ferries. All together, Blue Line has not disappointed yet.

Two out of the four times I took the ferry last year was in summer. The ferry then stops in Hvar once or twice a week, check the timetable on the site of Blue Line. There is also one ferry a week that sails during daytime in the high season.

Crossing from Italy to Croatia with the Jadrolinija

I did the crossing from Croatia to Italy and back quite a few times with the Jadrolinija as well but that’s been a while now, longer then one year, so I will not review that until a more recent trip. As I am very satisfied with Blue Line, I will probably cross with that company again next time too. I did use the Jadrolinija ferries regularly last year for national crossings within Croatia and I only had good experiences so far. Jadrolinija is a good company that’s been around for ages and is very reliable and safe.