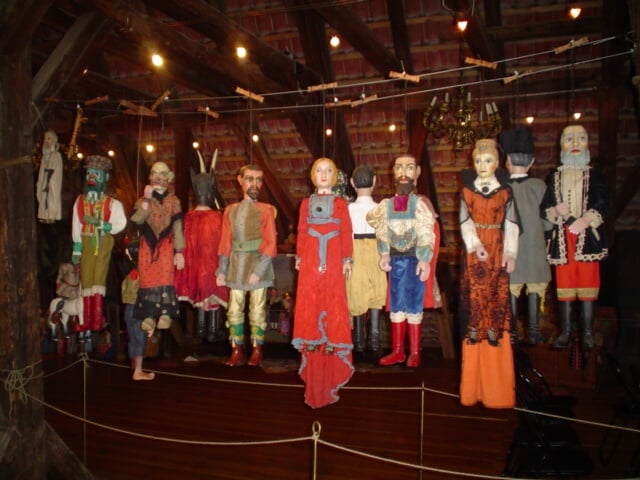 It seems there are museums about everything and anything these days. When living in France we visited a lavender museum, wine museum, doll museum, candy museum and a corkscrew museum. And I saw a really strange little museum in Croatia last summer, FroggyLand. There are more than 500 frogs arranged in different situations like ‘frogs going to school’ or ‘frogs painting’. I must confess I did not enter the frog museum as taxidermy is really not my thing.

I will share my personal top 15 small interesting weird and cool museums in Europe. It was difficult to only choose 15, I could easily go on until 100!

You will be able to visit this small museum in Reykjavik within half an hour but it’s worth it cause seriously, where else could you ever see all these penises?! The museum has got the largest penis collection in the world (215!). There are phallic specimens of fish and other animals – 93 animal species  – some fallus artworks and 1 human penis.

Museum of Broken Relationships exhibits objects that have to do with relationships that did not make it and tells the story that goes with the object. In that respect, it is a very poetic museum with a focus on storytelling and authenticity. People can send their own objects and stories to contribute to the unusual collection.

The museum was conceived by two artists, Olinka Vištica and Dražen Grubišić, when their own relationship ended. The museum immediately became very successful and now has a permanent location in Zagreb and one in Los Angeles. As one can read on their website “Museum of Broken Relationships is a physical and virtual public space created with the sole purpose of treasuring and sharing your heartbreak stories and symbolic possessions. It is a museum about you, about us, about the ways we love and lose.”

More info on the site of the Museum of Broken relationships.

Are you horrified by the dentist? If so, avoid this museum 🙂 The British Dental Museum has around 25,000 objects in the collection that reflect the development of dentistry over the years. Think of dental chairs, tools and … teeth …

More info on the site of the British Dental Museum.

No shortage of museums in Paris. We know Paris through and through and yet we still discover new museums everytime we visit the city. There use to be a special doll museum there, but unfortunately it was permanently closed some time ago after many years. The magic museum is also worth it, especially if you like magic and the like. It is a charming surprising museum in a unique underground location.

The museum has won several prizes and gives a very complete picture of the history of magicians and magic tricks. The tour ends with a small magic show of approximately 15 minutes.

The unique and photogenic Musée des Arts Forains is also in Paris. This building, designed at the end of the 19th century by one of Gustave Eiffel’s apprentices houses the replica of an ancient funfair with merry-go-rounds and attractions.You will see beautiful objects here that have to do with theater / performances / shows from the 19th and 20th centuries. It is a lively museum – you visit with a guide and you can touch and sit on objects etc. A real experience!

The fries museum in Bruges is the first and only fries museum in the world. You can learn anything and everything about the history of the potato in general and fries in particular.

In the third part of the museum, in the basement, you can taste those famous Belgian fries and also some typical Belgian meat preparations, such as meatballs and stew. Moreover, the museum is located in a very beautiful building, so you kill two birds with one stone.

More info on the site of the Fries Museum.

Not a fries lover? Would you prefer chocolate? In that case you may enjoy the chocolate museum in Brussels.

More info on the site of the Chocolate museum.

From fries and chocolate we go to funerals and corpses 😉 The funeral museum is located in the central cemetery of Vienna. You’ll find everything you want to know about the history of the cemeteries of Vienna here, as well as random facts about the funeral industry and traditions around death and corpses all.

The modern museum is large (300 m2) and interactive. It is quite interesting actually so if you are interested in this type of subject, you’ve come to the right place.

More info on the site of the funeral museum.

There is also a funeral museum in Amsterdam, check the site here.

While in Vienna, you might also want to check the museum of contraception and abortion.

The museum was founded by miniaturist Dan Ohlmann. The special effects section is a unique collection within that theme in Europe. A real must see for film lovers! It is a large space so take your time and walk among the film sets, masks, costumes, life-sized animals, robots and monsters.

More info on the site of the museum. Interested in museums related to cinema? Check this article!

This museum is the only museum in the world that is about fans. The fans are just as old and beautiful as the building in which the museum is located. And no, we are not talking about 100 or 200 fans – the Greenwich Fan Museum has a collection of no less than 3500 fans!

More info on the site of the Fan Museum.

Collector, doctor and mayor of the charming village of Tourrette-Levens (12 km from Nice), Alain Frère has collected all kinds of circus objects for many years. He also received a lot of donations from famous circus artists. These objects, costumes, posters and accessories form the basis of this private museum that has since expanded considerably.

A very interesting and quite nostalgic museum for circus lovers. You will find all kinds of artefacts and information about the history of circus and about the famous circus families such as Bouglione, Rancy, Pinder, Amar, Zavatta, Gruss, Medrano, Knee, Orfei, Togni, Casartelli.

More info on the site of the circus museum.

Make-up artist René Koch has founded the lipstick museum in an intimate, homely setting. You will learn everything but really e-very-thing about the history of lipstick here. Explore the world of lipstick, it’s an absolute must see in Berlin for all fashion and beauty addicts.

More info on the site of the Lipstick museum.

Also really cool in Berlin: the silence museum! This museum was founded by the Russian painter Nikolai Makarov and inspired by the Mark Rothko chapel.

More info on the site of the silence museum.

The Norwegian king of beer, Christian Ringnes, started collecting miniature bottles at the age of seven. Years later, he could easily open an entire museum. And so he did 🙂 This is the only museum in the world with such an enormous collection of mini bottles.

His collection includes about 53,000 bottles and about a quarter of them are displayed in the museum. It’s less boring than you would expect because the bottles come in all shapes and sizes, from Elvis Presley bottles to mini train bottles and circus theme bottles. A funny museum!

More info on the site of the Norwegian museum.

I really like commercials so I think this is a great museum. Everything revolves around product packaging and the publicity and communication around various products. It’s a bit nostalgic but mostly inspiring. If you like marketing and branding this museum is really worth a visit.

More information on the site of the museum.

There are countless bizarre and cool museums in Amsterdam. You should not miss the hash marihuana & hemp museum. This museum was founded in the 80s and has since grown into a real institute. The sex museum is mainly fun to pop in once 😉 The bag museum (the largest in the world!) is also quite special.

But my favorite Amsterdam museum must be the Kattenkabinet. It’s in a small canal house and cats are in the spotlight. As a figure of speech cause this museum is quite dark actually. It could use a bit more light, but that aside. You see cats in history and in different cultures, paintings, drawings, posters and sculptures . It’s a fun museum to go with kids too. Did you know that they filmed a short scene of Ocean’s Twelve here?

More info on the site of the Kattenkabinet.

This teeny tiny museum can be found in one of the most gorgeous towns in the Czech Republic. It is quite creepy because the museum is an old church and there are puppets staring at you everywhere in a baroque puppet theater setting. I really enjoyed it myself though, the atmosphere is very special and a staff member from the museum joined us upstairs and explained everything.

More information on the site of the puppet museum.

Do you have any tips about unique and fun, crazy or scary museums in Europe? Let us know in the comments!