We stayed in the suite 404 at the Grand hotel Diana Majestic in Diano Marina, Liguria, Italy. This is our review of that stay. My family and I walked in the Grand Hotel Diana Majestic on a cold February day. We were greeted by two receptionists – one woman who spoke English and smiled a lot and one man who only spoke Italian and smiled far too little.

My wife asked what rooms they had available for a family of five. We already had checked the options in the morning on their own website on the Internet and had seen that the cheapest option was the suite. At the reception though we were advised to book two connecting rooms.

When we were told the price, my wife said that she had seen the suite on the Internet for just 15 euros more. The very bad-mood receptionist started talking loudly in Italian to the smiling woman which resulted in the smiling woman saying: “I am sorry but there is no room in the suite for two extra beds”. So we took the two connecting rooms.

My wife walked with the children and bags from the car to the lobby while I went to park the car in the hotel parking. The bad-mood receptionist, instead of helping out with all the bags, told her in a very rude way to move the bags from in front of the door as the automatic door stayed open.

We then went up to our two rooms. The door in the middle of the connecting rooms was closed and we had received no key for it. The rooms were so small we got stuck in the corridor trying to get out again. Haha, seriously, not even joking 🙂 The rooms where dark and blend, surely not the most charming rooms in Diano Marina. I walked down to the reception and asked to see the suite.

Surprise!! It occurred the suite was bigger, far more comfortable and cost only 15 euros more than the connecting rooms. The housekeeping was not there though to open up the bed (which I believe was the reason they did not want to give us the room in the first place) so that would not be done before 19h00 which was perfectly fine for us. You can imagine we moved to the suite. The lady from housekeeping was the sweetest thing I have ever seen. That must be said!

What to say about the room (master suite). It did not have a lot of charm or beautiful decoration, just the usual sailboat in a frame and brownish and beige color tones but it was clean, large and it had a the best very large terrace (50 m2) with astonishing sea views. That view was seriously breathtaking. 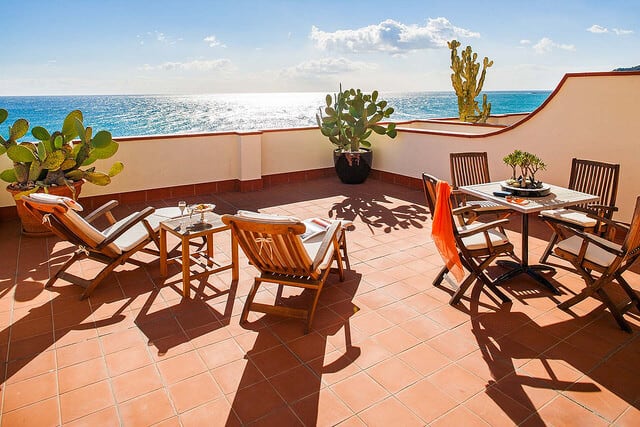 The marble bathroom was clean, there were enough towels and toiletries. Another plus point is that the hotel is well maintained, no defects. I slept quite well too, the bedding was fine quality.

Because we stayed in the hotel in winter, the pools and the private beach were closed. Diano Marina is a real tourist resort, it wakes up in the summer months. There were loads of old Italian people this time of year. I gather it must have been one group. So there were the old people and us, that’s all. The atmosphere must be incredibly different in summer with the pools, sea and sun.

We bought some nice Focaccia in town for us and we ordered room service for the children: pasta with tomato sauce, grilled sandwich with ham and cheese and fries. It was quite good, nothing very special but good enough. The waiter was friendly. Everything fine here, no complaints 😉

I woke up hungry and after getting the kids and the wife ready we went downstairs to the breakfast room but…when we walked in we saw the waiter taking the last food away. He startled when seeing us and screamed something in Italian to his colleague who screamed something back and then he came and told us: “sorry breakfast is finished”.

I looked on my watch, it was 10 to 10. Breakfast was supposed to be until 10 but we did not start a discussion as he did not speak any English and we do not speak great Italian. I think they just cleaned up after the group of old people finished, not realizing there was still somebody staying else in the hotel.

The panicked breakfast guy told us to have a seat at the bar and the bartender brought us coffee and chocolate milk for the children. Then the breakfast guy came back with two plates. One with three pieces of cake and one with three croissants with apricot jam. They both disappeared right after that and we never saw them again. Enjoy your meal!

Not my favorite hotel

Check out was fast and problem free. The receptionist seemed very pleased to seeing us leave Grand Hotel Diana Majestic 🙂

All together, I would not recommend. Grand Hotel Diana Majestic does not have the greatest location. It’s a fifteen minute walk to the centre of Diano Marina. The hotel does not have any particular charm except for the wonderful sea views. There are hotels with more charm in the region (which is splendid by the way). If we would return, we would rather sleep in the little town Cervo, just 15 minutes from Diano Marina.

Why make so much of fragmentary blue In here and t