We lived in Split in Croatia for 6 months until september ’12. I love love love Split, it’s my dream town (with just two small exceptions, one being the lack of jobs) . Anyway, when you move to a new country, you have to get used to the new food habits, to learn where to buy your food and the names of the ingredients in the new language.

Ne razumijem but I am pretty hungry

I mean sure, you can get quite far by pointing out stuff but at some point you’ll get stuck. That happens to me all the time at the butcher cause I seriously don’t know what to point out, it all looks the same to me, I just know the name in Dutch or French but…not in Croatian.

And do you know the feeling, when you’re in the supermarket and you just can’t figure out which one of all the little pots with creamy cream-look-a-likes creams are actually sour cream and not some kind of cheese or something? So  what I do when I’m lost is…I make lists.

There is a nice new bakery behind the Peškarija, it’s called Kruščić. You can see the bakers shaping the dough behind a window. They have a good choice of brown breads.

Krafna – Kind of donut, filled with jam or chocolade 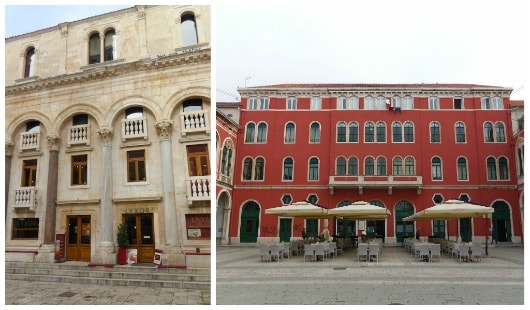 It’s nice to have a drink in the sun and enjoying  laid-back Croatian life on one of the many outdoor terraces on the Riva. I forget the official name of the Riva all the time cause it’s so long but here it comes: Obala Hrvatskog narodnog preporoda. Another delightful place to have a drink, even though very touristy, is Luxor on the Peristil.

Last but not least, Cafe Bajamonti on the Prokurative, my favorite square in Split. It’s a really inviting (very Western European kind of place, makes me think of Vienna rather than Split) place with a large inside area with free wifi, so it’s a great place to work as well! Živjeli!

Have a drink on the Riva (c) Zergu, Flickr

Vino (bijelo/crno) – Wine (white/red). Croatia has some great wines. Try a red from the Peljesac peninsular or one of the red or white wine varieties from the town of Ilok!

Ćevapčići (or Ćevapi) – Minced meat patties, you can get them at the butcher and make them yourself. It’s a very easy recipe actually.  But you can also buy them grilled in a sandwich. I would get them at this tiny shop for more then fifteen years but it closed last year. Horror!

So now I get them at Ba!Će or at Kantun Paulina (both very close one to the other). So basically it’s meat patties in a nice bread called Lepinja with Ajvar, a sweet red pepper sauce (or with kajmak, kind of cream, at Ba!Će) and raw onion. An absolute must try while in Croatia.

The Peškarija is the daily fishmarket on Marmontova. There is a part outside and a part inside. The cleaning guy is inside. So when you buy your fish you can get it cleaned for a small price in the little building.

It’s nice to go there early in the morning around 7h, you’ll see the fisherman arriving with the fresh fish. After 12h the prices drop as they close around 14h.

Next to the Peskarija, there is also one of the best fish restaurants of Split: Noštromo with great fresh seafood (yeah, what else?!!) and very nice staff.

The Stari Pazar, “old market”, is a market where you will find lots of different products like flowers, fruit and vegetables, clothes, souvenirs, etc..It’s next to the silver gate, between Diocletian’s palace and the main city bus stops.

The supermarket chains that are at about every corner of the streets are Konzum, Tommy and Kerum. There is also a large Kerum (yes same Kerum as the mayor) on the ground floor of the Joker shopping center (*NB It’s been bought by Tommy since I wrote this).  Out of the center of Split you will also find two Lidl’s (German) and one Billa (Austrian).

Paški sir  – Hard cheese made from sheep’s milk, from the island of Pag (try it, it’s fabulous. Here’s more info about Paski sir)

4 thoughts on “Where and what to eat in Split, Croatia”

Good morning, and in case I don't see ya, good aft

Be Inspired ♡ When purple hibiscuses fall by @ch